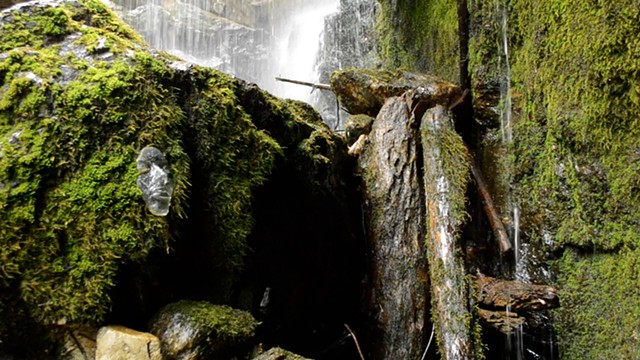 Michaela Bridgemohan is a multidisciplinary artist of Jamaican and Australian descent who grew up in Mohkinstsis, also known as Calgary, located on the traditional territories of Treaty 7 Land. She is currently an MFA candidate at the University of British Columbia - Okanagan and received her BFA (with Distinction) from the Alberta University of the Arts in 2017. Bridgemohan continued her artistic research confronting criticism and concepts of Black biracial subjectivity, Afro-diaspora, and the visual ambiguity surrounding those kinds of bodies.

Weeping Gideon Child (2020) is a continuation of Embedded Spirits (2018-2020) which engages with disembodied figures amidst a revival process. I intertwine personal narratives, Jamaican folktales, cultural mysticism and the complexities of racial ambiguity as to transform into something anew. I attempt to use my body as a duppy, a malevolent entity, to mimic the experience of occupying two worlds at once. Duppies are remembered as vengeful spirits who were maroon slaves, lynched at the arms of trees on foreign land. Ghosts and shape-shifters all occupy a liminal, in-between space that is reflective of racial obscurity, bodily shedding, internal and external transformation and subjugation. When I engage with these folk-monsters, I want to confront ideas of personal shame, identity, racism, cultural erasure, and trauma in order to make sense of my relationship to the unceded land I live on.