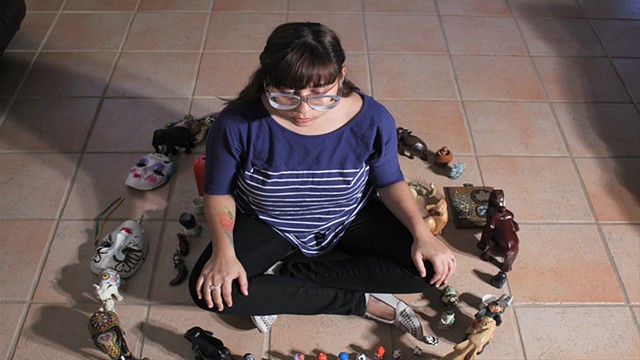 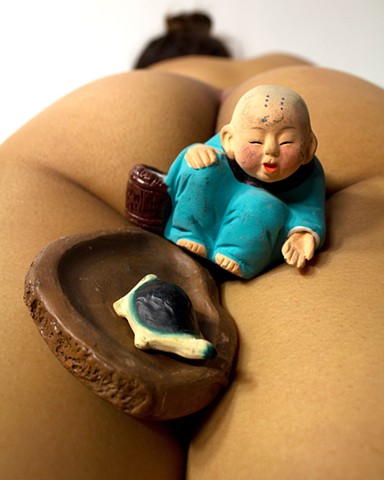 I am interested in cyclical patterns and ritual within my life and my work. I became obsessed with the development of my own rituals throughout the two-year process of constructing the body of work I’ve called Traveling Fatherhood. The piece explores the strained relationship I have with my father and the bond we developed through the objects he would bring back at the end of each of his business trips. Due to a chronic illness, I was forced to move back into my parents’ house at the age of twenty-one. I began to evaluate my childhood as an adult re-inhabiting my childhood home. My mother and father have always spent more time at work than they do at home, but because my father continually worked for companies that required him to travel often, he was absent much more than my mother.

Upon moving back home, I began to notice my father once again pursuing his old habit of bringing back knick-knacks from his travels. The re-visitation of our ritual directed me to the realisation that our relationship—which I had believed until this point was non-existent—was in fact complex and profound. The proof of our connection was overflowing from the cabinets, adorning every inch of wall space, and filling drawers and closets to capacity. He was ever-present through the souvenirs commandeering our house.

This revelation sparked the need to build my own rituals and bonds with each of the objects my dad has given me. Through this process, I felt that the bonds I began to build with each keepsake deepened and broadened my own bond to my father. Initially, I began intuitively placing each of the gifts onto my body and documenting the process of forced intimacy.

I proceeded first by constructing scenes for the camera that are representative of major and minor events in my life at which I wanted my father to be physically present, but he wasn’t able to be, and replaced him in the photograph by one of his tchotchkes.

Soon thereafter I conjured the objects to life. Using stop motion animation (to be redirected to the film, click here: Traveling Fatherhood), the wooden warriors, coffee mugs from various far off places, decorative plates, boomerang, miniature Buddha statue, hoards of elephants, gift shop t-shirts, paintings, etchings, red London telephone booth piggy bank, pitchers, carved Honduran plaques, lucky cats, and so on sprang forth from the cabinets, drawers, and closets, dislodged themselves from the walls, and ceremoniously traversed the domestic terrain. The short film, entitled Traveling Fatherhood, begins with my father filling his suitcase with an assortment of necessities for an upcoming business expedition. Upon his departure, rather than being enveloped by emptiness, the house teems with activity. I become a character within the world of the bewitched inanimate. I am the sorceress rousing each object from its slumber. Traveling Fatherhood climaxes with the return of my father and concludes with the addition of a new set of tchotchkes to the community of tchotchkes.